Laika is an experimental sounding rocket designed to fly an 8.8-lb payload to 10,000 ft using the MASA Spirfire SRAS liquid bipropellant rocket engine. It has an SRAD-wound carbon fiber airframe and stands 11 ft tall with a total takeoff mass of 87.5 lbm. It uses a dual-bay parachute configuration, which is controlled by dual redundant commercial flight computers. The rocket’s primary payload is designed to investigate combustion in high and low acceleration environments. The rocket also carries an experimental SRAD flight computer, which logs flight data. 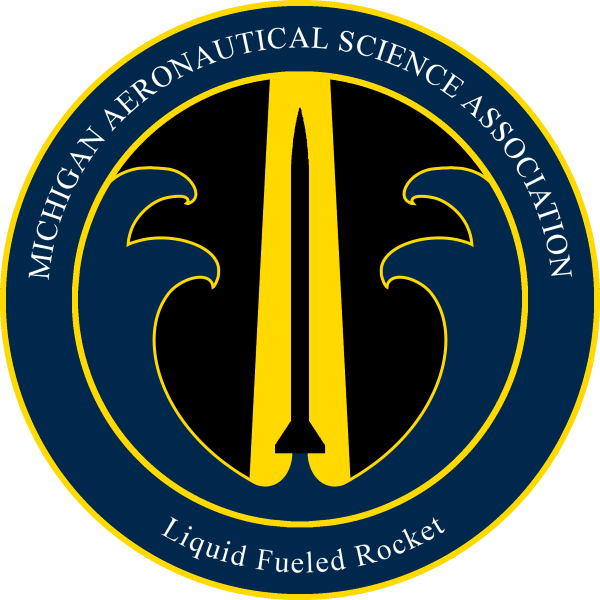 Payload
Propulsion
Aerostructures
Avionics & Telemetry
Recovery
Payload
Laika's payload observes the effects of high and very low acceleration on flame propagation. It consists of two separate acrylic chambers that each contain a cotton ball coated in petroleum jelly and an e-match. These chambers will be watched by two cameras mounted on the opposite wall and the top of the payload. One e-match will ignite at liftoff while the other will ignite at apogee. This payload was designed and fabricated by Plymouth-Canton Education Park students with the assistance of MASA members and mentors.
Propulsion
Laika employs a student-designed and built liquid bi-propellant engine, called Spitfire. It uses nitrous oxide as the oxidizer and 95% ethanol as the fuel. The engine produces 10 800 N-s of total impulse, with 3 780 N of nominal thrust, and burns for five seconds. The engine has propellant tanks for both fuel and oxidizer, a combustion chamber, motorized ball valves, a differential pressure transducer for nitrous oxide liquid level sensing, two linear-actuated quick-disconnect fittings, as well as numerous vent solenoids and pressure transducers. The engine’s Isp is calculated to be 215 seconds.
Aerostructures
Laika stands 11ft tall and has an outer diameter of 6.4 in. Laika’s airframe weighs approximately 17.4 lbs. The body tubes, nosecone, and couplers are made of wound carbon figure, with internal retention components made of fiberglass/wood composite plates, and nosecone pieces machined from 6061 aluminum. Carbon fiber components were wound using an X-Winder filament winding machine. Structural components of the engine, which include tanks, tank endcaps, injector and injector manifold, aluminum ribs and the nozzle retention ring, were machined by students on manual and CNC lathes and mills.
Avionics & Telemetry
The Avionics & Telemetry system consists of the Engine Controller and Live Telemetry System. The Engine Controller is a circuit board designed entirely by the team which operates with software written by the team. It is made up of two boards which each independently support up to 8 valves/solenoids, 2 motorized valves, and 8 pressure sensors. The Live Telemetry System measures altitude and controls parachute deployment, in addition to recording and transmitting flight data.
Recovery
Laika is equipped with a drogue and a main parachute. At apogee, the flight computers blow the drogue deployment charges and release the chute, slowing the rocket to 85 ft/s. At 1000 ft ALG, the flight computers then blow the main deployment charges and release the main chute, slowing the rocket to below 20 ft/s. Using a GPS tracker, the rocket is then located and returned to base camp for evaluation.
Launch Gallery